Pay more, get less: consumer incomes and spending eaten away by searing inflation


Has inflation eaten up my homework?

By Wolf Richter for WOLF STREET.

You saw it coming after today’s release of the Personal Consumer Expenditure Inflation Index. Core PCE inflation, which excludes food and energy – the lowest lowball inflation index proposed by the United States and which the Fed uses to track its inflation target – rose by 6.4% at an annualized rate over the last three months. In May alone, it was up 0.5% from April.

Consumers got remaining incentives and additional unemployment checks and other stimulus funds from the government in May, which further boosted their incomes, but less than in previous months. Consumers then spent this income in heroic ways. But inflation ate some of their spending in May, and corrected for inflation, it fell.

Adjusted for inflation, the “real” income of consumers from all sources fell 2.4% in May from April and 1.1% from May of last year, according to the Economic Analysis Office today. Unadjusted for inflation, consumer income fell 2.0%. Each of the three waves of stimuli sparked a glorious increase in WTF income. Those incentives are running out now, but consumers still receive other payments from the federal government, including special unemployment benefits:

How this surge in inflation, the highest since the early 1980s, begins to accumulate month-to-month, inexorably and cumulatively, is illustrated in the chart below. It tracks personal income from all sources, adjusted for inflation (red line) and unadjusted for inflation (green line), both expressed as an index set at 100 for January 2019. Note the gap which widens sharply between the two lines. This is the effect of inflation. I’ll follow it this way in the future: 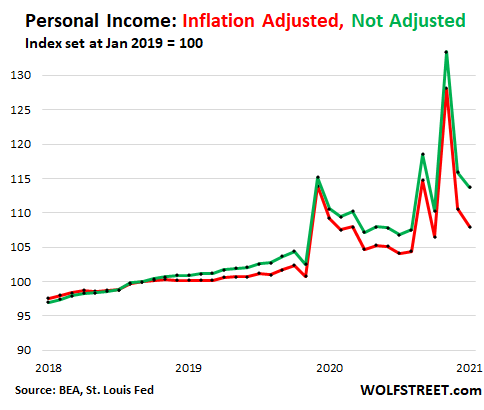 American consumers always try to spend heroic amounts of money as fast as they can – they just haven’t kept up with inflation. 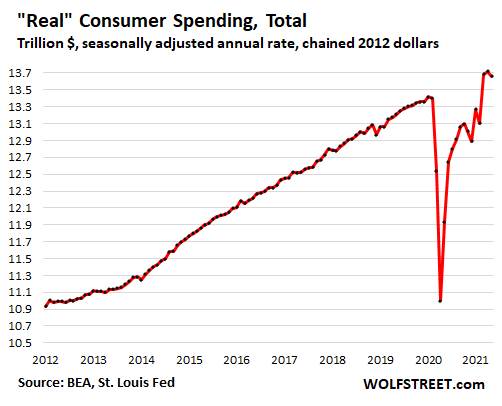 Actual spending on services only increased a tiny bit (0.4%) and was still around the level of November 2018. Everyone expected the great shift from goods to services to finally begin. But not in May. Compared to May 2019, real expenditure on services is still down by almost 3%.

Services account for about two-thirds of total consumer spending. This is the big one. But discretionary services have been hit hard – such as travel reservations, shows, sports venues, cinemas, and more. And they are slow to recover. Movie theaters in particular, like many aspects of brick and mortar retailing, may never fully recover. 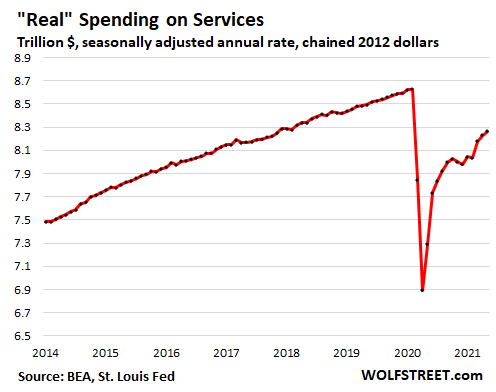 Real expenditure on non-durable goods declined for the second month in a row, but remained historically high. These products are dominated by supermarket items, where spending during the pandemic increased surprisingly as consumption shifted from the workplace to the home after people lost their jobs or switched to working from home: 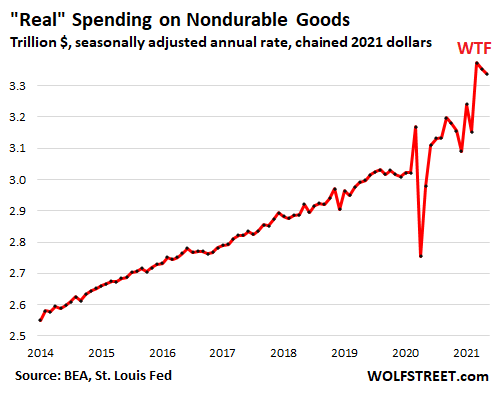 Real spending on durable goods has declined 4.3% in May from WTF levels boosted by March and April stimuli, but remained at searing levels as retailers grapple with all kinds of supply chain issues, tight inventory and shortages. This includes motor vehicles, where the price increases have been particularly strong. 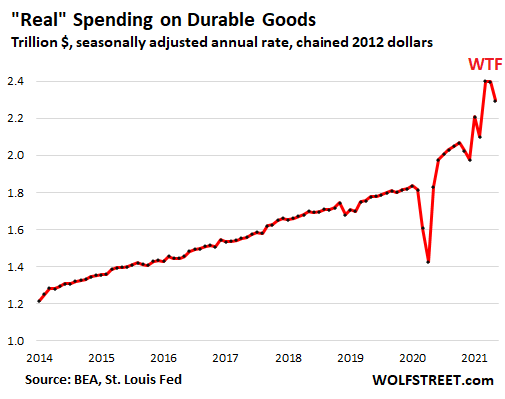 The Americans, still fortified by the stimulus payments, were spending with all their might. But they’re struggling with higher prices, and they’re starting to see significant inflation going forward.

In real life, it comes in all forms as consumers are faced with higher prices, smaller packaging, or expensive but minor upgrades to an original item that no longer exists. And they gladly pay more, because their mindset about inflation has changed for the first time in decades.

It’s also starting to show up in consumer surveys, including the New York Fed’s survey of consumer expectations. Inflation expectations jumped to 4.0% for the 12-month outlook (red line) and 3.6% for the three-year outlook (green line). They’ve been a bit slow to get the hang of it, but they’re catching up: 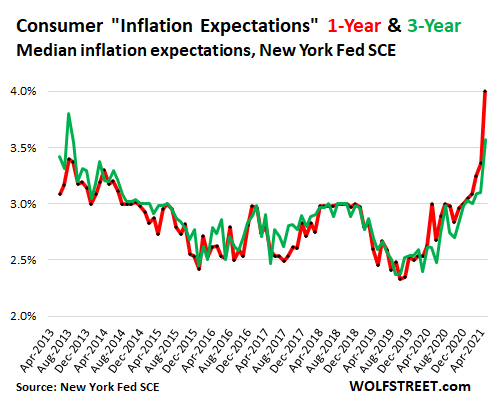 Do you like reading WOLF STREET and want to support it? Use ad blockers – I totally understand why – but you want to support the site? You can make a donation. I really appreciate it. Click on the beer and iced tea mug to find out how:

Would you like to be notified by email when WOLF STREET publishes a new article? Register here.

Excellent information on installing a metal roof on an existing building.