My Unforgettable Summer of 1966 at M&M Produce

JUST CALL HIM JACK: The author, seen here in 1966 with his 1959 Volvo station wagon, took his driving to a new level that summer with an unforgettable delivery job at M&M Fruit & Produce of Beach Haven Terrace. (Photos courtesy of Justin M. Baxter)

“Justin…what kind of name is that?” asked my hopefully future employer as he looked at my job application. I had just graduated from high school and was hoping to find a summer job on the shore. While Justin was indeed not a common name at the time, it wasn’t a question I expected.

“Well, uh, uh, that’s what my parents chose to call me,” I stammered.

“Well,” he replied, clearly unimpressed by my answer, “if you want to work here, your name will be Jack.” I did and it was.

So began my summer job at M&M Fruit & Produce in Beach Haven Terrace. I got a room at The Waves, now The Williams Cottage, in Beach Haven and started working the next day.

Long gone and its site replaced by pickleball courts, M&M in 1966 was a wholesale supplier of foodstuffs to restaurants and bars on Long Beach Island and a few off-island ones, such as the Log Cabin of long-gone Clayton, where Route 72 joins Route 543. My job – or should I say “Jack’s” job? – consisted of assembling, loading and delivering the goods on the basis of lists given to me each morning. 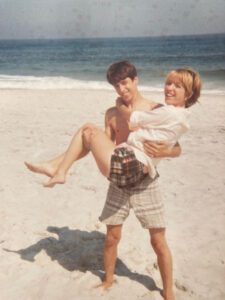 BEACH ANICS: Justin and his sister frolic on the sands of Surf City in 1966.

Orders ranged from bushel baskets of clams to cardboard platters of frozen steaks secured with metal bands, to wooden and wire crates of endive and escarole to large metal tins of potato salad and coleslaw (the ubiquitous 5 gallon plastic bucket had yet to make its debut). There were baskets of peaches, peppers, corn on the cob, tomatoes (Jersey, of course) and lots of fish: fresh if it’s local and frozen if it’s from elsewhere.

My working hours were 7:30 a.m. to 4 p.m., but most of the time I didn’t come back until after 5 p.m. My pay rate was $2 an hour. I remember how proud I was when at the end of one particular week, “Jack’s” paycheck hit triple digits!

I enjoyed the job as it was fun to meet other people my age, especially girls working in and around the kitchens. Although I never received a cash tip, many kitchen/bar managers would offer me food and/or drinks. I could always count on a frosty mug and a hot dog at A&W Root Beer. A bar manager – it might have been Joe Pop’s Shore Bar – offered me a container of draft beer “for after work,” he said. For a teenager, that might sound great, but the idea of ​​drinking a hot, flat beer from a soggy cardboard container held little appeal.

Although often quite pleasant, the work could be grueling. More than a few kitchens were on the second floor. I well remember climbing baskets of clams and mussels up a rickety outside staircase at a restaurant in Barnegat Light.

Some produce and seafood were retailed on the sidewalk at the front of the store, but large bins, crates, cartons and other containers were in the back, stacked in giant coolers and a walk-in freezer. There was an ice machine and a loading dock that opened into the parking lot. This is where the M&M fleet was assembled, a motley collection of trucks of different vintages, the cabs of which were all painted in “shark orange”. 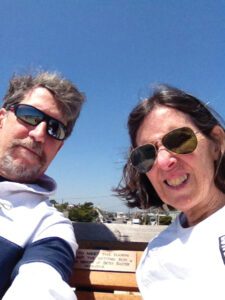 BEACH BONDS: The author and his wife, Nancy, take a more recent selfie on the bench overlooking the beach at Fourth Street in Beach Haven. The bench is dedicated to their daughter Elizabeth (1979-2016), who loved the beach and walked straight into the ocean at 9 months old when she first learned to walk.

My favorite “driver” was a new three-quarter-ton International Harvester pickup. We had heavy padded blankets to cover frozen items. Also in the fleet were an older GMC flatbed that had no glass in the cab except for the windshield and a mid-size box truck of unknown vintage simply known as a “dump truck. tilting”. The dump truck did not actually dump; there was no hydraulic mechanism for it. He gets his name from his singular duty to go every Sunday to a giant landfill off the island.

The dump truck owed its limited usefulness to the fact that its first gear was gone years ago and the engine, with cylinder walls and pistons worn from ages, was burning oil…lots of oil . The joke at the gas station was “fill it up with oil and check the gas”. Second gear replaced the missing first, and to get in motion and avoid stalling, you had to rev the engine and engage the clutch. The result was huge clouds of blue-white smoke and the pungent smell of burning asbestos. To avoid starting from scratch, I tried to “time” the lights on the boulevard.

On Sunday mornings, I would load the truck with all the garbage and garbage generated during the work week, all kinds of “stuff”, then, once at the dump, I would rake it and shovel it. Apparently an unenviable job, I really liked it. The landfill was located near where Stafford Park is today, beyond Manahawkin, a relatively undeveloped area at the time.

The dump was huge: hectares and hectares of all kinds of waste. He had an otherworldly aura about it. Aside from the circling seagulls, who had learned that this dump offered a large assortment of tasty snacks without having to grab them, it was a quiet and somewhat eerie place. I remember that in the middle, among the rotting bags of trash, trash and construction debris, was a wooden fishing boat. It must have been at least 50 feet long. How he got there, I have no idea. It was as if it had just fallen from the sky. I once came across a lobster claw twice the size of a soccer ball. It was a strange but fascinating place.

One particular Sunday, as I was preparing to pull out of the back parking lot, my boss, Tony, opened the passenger door and put a flat wooden crate on the seat next to me. “Turtles…for making snapper soup…sat in the bottom of the freezer longer than I can remember,” he announced, slamming the door.

Thus armed with trash, front and rear, I spun down the boulevard and headed north for my rendezvous with fate. The frosty fuzz from the freezer on the terrapins evaporated quickly in the August heat and I could now make out maybe a dozen greenish platter-like slabs starting to wiggle and wiggle to the rhythm of the engine vibrations. .

The traffic light timing usually worked pretty well, but that Sunday as I entered the Ship Bottom circle, the light turned red. As I pulled up, a new Ford Mustang convertible (weren’t they all back then?) pulled up in the left lane. I looked down from my high perch to see two girls around my age wearing two-piece bathing suits (downright Victorian in today’s beach fashion). Immediately they started berating the truck and, by association, me. Seemingly behind me as I crawled down the boulevard, they were indignant at being subjected to such a “heinous, stinking, smoking menace to traffic,” as they put it.

As they continued their harangue, I glanced over at the Turtles’ apartment, now completely thawed out and looking like so many shiny, glittering, melted Frisbees. At that moment, the proverbial “little light bulb” went off in my head. It was too tempting ! I carefully caught one of the slippery drops between thumb and forefinger and, with a deft motion, flipped it over the steering wheel and out the window. He landed in the shotgun girl’s lap with a most satisfying KER-SPLAT! Small drops and specks of gray-green offal splatter the dashboard and enamel the driver. At that moment the light turned green, and with a roar of slamming pistons and a cloud of acrid smoke, I lurched forward.

Looking in my side mirror, I could see that both doors of the Mustang were open and the girls were running around, jumping up and down and gesticulating wildly. I couldn’t understand what they were saying…luckily for me, I’m sure. I never saw them again.

If there were to be two “older” ladies out there who recognize this story, I apologize belatedly. I also send my thanks to you. Thank you for helping to make my summer of 1966 such a memorable one!